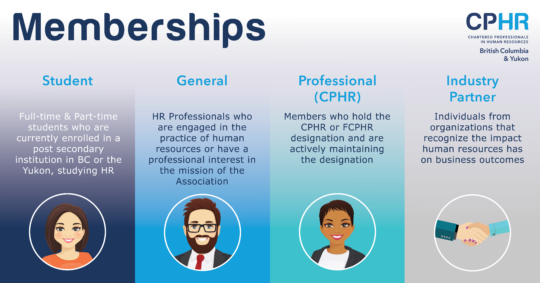 Annual membership dues are payable on a one-year period basis commencing on the member’s admission date and every successive anniversary date. Such membership dues are considered fully-earned, are not transferable (unless an Industry Partner Member), non-refundable, and ineligible for suspension or postponement (in instances of maternity leave or work separation for example). Other CPHR BC & Yukon fees such as the NKE Registration Fee are likewise considered fully-earned; eligible however for deferral upon communication with the Registrar.

Industry Partner memberships are based on a calendar year and are payable no later than January of the calendar year.

CPHR Member Dues become payable on the date a member is granted the CPHR designation.

You must be a current General or Student member in order to embark on the CPHR path.

To transfer your CPHR designation from another association to CPHR BC & Yukon, you must complete and submit the CPHR Membership Application Form and also contact your current association for the transfer of your CPHR records.

If you wish to earn and/or maintain the CPHR designation but you reside outside of BC and the Yukon, please contact cphr@cphrbc.ca for information on non-resident membership options.

General Members are engaged in the practice of human resources or have a professional interest in the mission of the association.

Student Members are individuals enrolled in two or more courses per semester in any degree or diploma program in a recognized post-secondary institution.

Any students enrolled in programs accredited by CPHR BC & Yukon are automatically eligible for student membership.

Student member pricing is intended to alleviate some of the costs associated with membership for those who intend to progress to a professional membership upon graduation*.

*Student members, upon graduation from a program, will receive a 50% discount on their general or professional membership dues for the first-year post-graduation (New Graduate Membership). For an individual to access this post-graduation discount, CPHR BC & Yukon records must show that they have held a student membership for a minimum of 12 months. Please note that Student Members are non-voting members of the association whereas New Graduate Members are voting members.

CPHR BC & Yukon recognizes the importance for new graduates to stay connected to their profession at a time which can often be financially challenging as they start their career path. The Association offers a special one-time reduced membership fee of $200 to existing CPHR BC & Yukon Student Members for their first membership renewal following post-secondary graduation.

The New Graduate rate only applies to students who were already Student Members of CPHR BC & Yukon before graduation. Those joining for the first time as new members after graduation must join as General Members, even if they are in their first year after graduation.

All privileges of General Membership are included. New Graduate Members are eligible and encouraged to begin the process to apply for the Chartered Professional in Human Resources (CPHR) designation. If a new graduate is already a CPHR Member, the regular CPHR Member fees will apply. However, the New Graduate rate will apply to members who are CPHR Candidates.

CPHR BC & Yukon members that are fully retired from human resources practice and have been members of the Association or have held the CPHR designation for at least five continuous years immediately prior to retirement are eligible for discounted member dues of $60/year. All privileges of general membership are included. If applicable, the CPHR designation changes to CPHR Retired. Please contact membership@cphrbc.ca for more information.